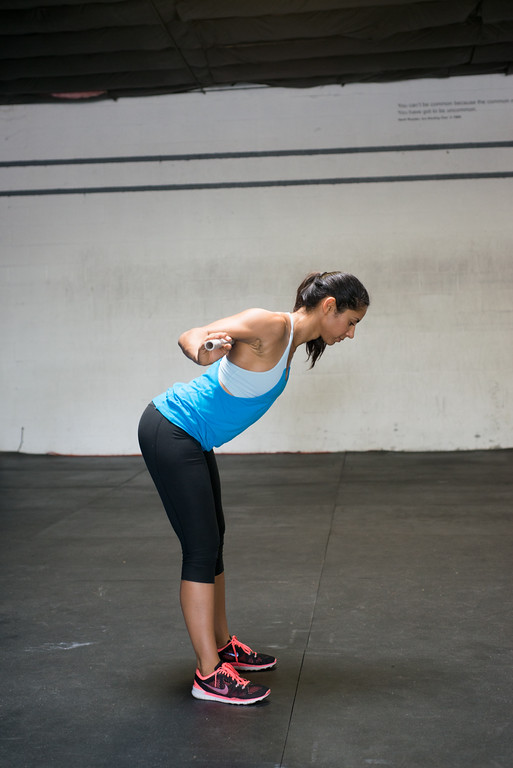 Hip hinge domination will take you from average to awesome in every area of your life.

For years I obsessed over this movement. I watched students in class hinge so poorly my eyes bled. So I read books, blogs, attended workshops and asked other coaches “how the heck do you teach the hip hinge?” No answer satisfied me.

How could it? The hinge is a basic human movement that every body should master. Yet our society is so fundamentally screwed up in basic movement patterns that the hinge feels more like a lost art. It’s a shame really. If we all learned to hip hinge #likeaboss we’d be stronger, have healthier backs, move purposefully and gracefully, and avoid injury.

For a beginner or deconditioned person, mastering the hip hinge is like learning to walk again. We lack the motor skills or awareness to do it right, so drills will be simple and without load.

For a more conditioned or athletic person, it pays to revisit the basics and have a coach assess the movement when under a load. Say, a heavy deadlift.

Doing so will prevent us from 1) blowing our our back the next time we pick up a pencil and 2) load the posterior chain more effectively, which in turn enables us to 3) #ownthatass Shape it, sculpt it, and bring all the boys to the yard.

Pretty sure I learned this from Tony Gentilcore way back when (in fact, he was a coach I pestered with my hip hinge questions). There are two ways to do this and it all depends on your posture, thoracic mobility and just general tendencies.

Maintain neutral spine, contact with PVC pipe as you hinge from the hips

Alternative: PVC across widest part of the back

Why it works: The tactile cue behind our back reminds us to maintain a neutral spine and break from the hip. With the stick placed horizontally, we cue ourselves to open up the chest, which is critical in the hinge. For the desk bound athlete with internally rotated shoulders, poor posture (kyphosis or lordosis) this is the way to go.

Why it works: This is a progression from the stick hinge version. It’s an alternative and would normally be used with those who understand how to maintain a neutral spine in other positions but tend to default into a squat or rounded back posture when they’re picking something up from the floor. The load (use a plate or kettlebell) should stay as close to the body as possible and if the hinge goes awry, you’ll feel it immediately. Use it as part of a dynamic warm-up before a hinge domination day. It’s not my favorite drill but the feedback from the booty touching the wall does it for some people rather than using a stick. To each his own.

Why it works: First of all, these movements are a staple in that #ownthatass glute repertoire. The bodyweight glute bridge is a simple movement that ingrains the hinge pattern with minimal load and from the ground. The loaded hip thrust is the next step up and it’s an effective tool for working that hinge, building that booty and loading the posterior chain properly.

For the advanced, also a powerful #ownthatass exercise

At this point you’re hip hinging like a boss but to really amp that sh*t up before full on deadlifts, the KB suitcase version is the bee’s knees.

Why it works: The double bell version is easier and creates balance. The single bell is a progression and works wonders for core strength, grip strength, and general badassery. The offset load of the KB forces our core musculature on the unloaded side to work harder to stabilize, and is a great tool to strength our stabilizers as well. Flexibility might hinder you from reaching down for the bell while remaining in a hinge. If that’s the case, prop that bell up on a few bumper plates, step, or low bench. Here’s a nice tutorial on each variation.

Why it works: Because #bootygainz. So far we’ve covered only bilateral hinge drills and exercises, but single-leg training has tremendous carryover into crucial movements like the squat and deadlift, as well as performance. The unstable environment created by using one leg challenges balance, coordination and a host of stabilizers. The most important aspect, however, is the ability develop the muscles in terms of size and strength, correct imbalances from one side to another, and is critical to helping us remain injury-free. Use it as an assistance exercise after your primary lifts (i.e. squat, deadlift) and go lighter than you would on bilateral exercises.

This is the last frontier of hip hinge domination, and while I would not recommend using this to coach or learn, the hip hinge I do like to use it to ingrain the lockout at the end of a deadlift for those that have demonstrated a solid hinge pattern. Plus, it’s fun and powerful.

Why it works: A lot of lifters will lock out at the top of a deadlift with a slightly forward hip thrust and squeeze of the booty. This causes lots of low back issues down the road as you’re forcing your lumber spine (that’s your low back, y’all) into hyper extension. The swing is also an explosive movement that engages the entire posterior chain, glutes and hips. Great exercise for general conditioning purposes that beats an hour of soul crushing, endless cardio.

Finally, there’s the deadlift. The ultimate hip hinge movement, but one that I feel is earned in the family of hip hinge exercises. It’s why it’s not listed here, but don’t be fooled. To master the deadlift, you must first master the hinge.

Do you have a favorite hip hinge drill or exercise? Share it with us below! We want to learn from you too!